Dickey Chapelle is a legend in the lore of combat photographers. I can’t imagine Dickey Chapelle was ever a victim of any man and she should act as a role model (and inspiration) for all women in this age of #MeToo. A boobytrap killed Dickey Chapelle, while she was patrolling with Marines, in Chu Lai, Vietnam on November 4, 1965.

The Platoon Leader inadvertently tripped the boobytrap and a fragment of shrapnel pierced her carotid artery and she bled out in just a few minutes time. It was a mortal wound and no one could have saved her. I spent a 13-month combat tour of duty at Chu Lai, as a young Marine Sergeant, January 1967 to February 1968.

Dickey Chapelle is one of my heroes: as a photographer, as a woman and as a courageous human being. The Marines adored her in World War II, Korea and later in Vietnam. She was one of them. Shortly before returning to Vietnam (for the second time) she said: If I have to die I want it to be on patrol with Marines (paraphrased). She got her wish and I find some solace in that. Shortly after her death the Marines erected a plaque in her memory at Chu Lai—one of their own had fallen.

Although I met a large number of combat photographers in Vietnam (both military and civilian) I never had the good fortune to meet Dickey Chapelle—what an honor that would have been. She was tough, brash and hard as nails—there wasn’t an ounce of crybaby in her. She loved tough people who fought hard for what they believed in and that’s why she gravitated to the Marines. And that’s why they loved her so much. If you’re a photographer, a woman or just a person who likes badass people give this video a look-see. You can be a warrior or you can be a victim—it’s a choice. 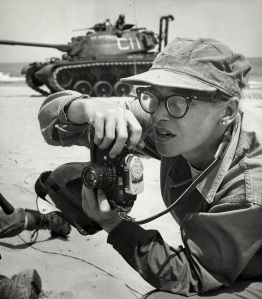 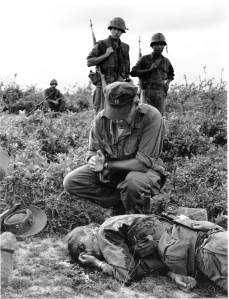 3 responses to “Photography 101: Dickey Chapelle Is a Legend”